Governing bodies to stop athletes betting on own events

Governing bodies to stop athletes betting on own events

Governing bodies move to stop athletes betting on their own events 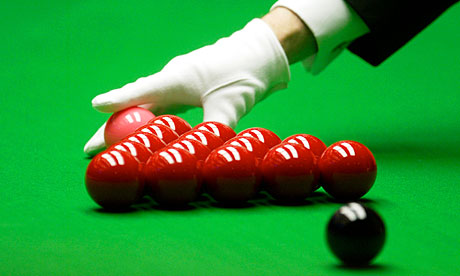 Snooker Snooker is one of several sports which have suffered from allegations of match-fixing in recent months. Photograph: Trevor Smith/Alamy

All professional sportsmen and women are likely to be banned from betting on any competition in which they take part. The Sports Betting Group, a coalition of governing bodies convened as a result of a government-commissioned review of sports integrity issues chaired by the former Liverpool chief executive Rick Parry, is likely to propose the idea as one of a series of guidelines to other governing bodies with the aim of unifying their approach. The intense focus on potential match-fixing in the wake of high-profile cases in football, tennis, snooker and cricket has increased the debate's sensitivities.

Some sports ban betting outright, as do some overseas governments. Others, such as football, ban players from betting on competitions in which they take part while others still allow players to bet on themselves to win.

The Sports Betting Group is likely to be the forum through which recent suggestions for more coordination and cooperation over anti-corruption measures are likely to be pursued. One silver lining of the high-profile allegations of recent weeks is that the issue is now firmly in the public eye and at the forefront of ministers' minds. An event planned by the group for November will seek to maintain momentum.
British Horseracing Authority gets levy lift
The British Horseracing Authority, gearing up for a final push in its battle to convince the government that the levy system should be fundamentally overhauled, is taking heart from the first public statement from gambling minister John Penrose on the matter. In a written answer, Penrose confirmed he had met with representatives from both racing and bookmaking – locked in a bitter battle over the levy – to "seek suggestions about how it might be improved or, if possible, suitably replaced". The racing industry is interpreting that as confirmation it is winning the argument and that the minister is considering replacing the levy with a so-called "betting right". Any such arrangement would be bitterly resisted by the gambling industry. The BHA has argued that fundamental reform is required if the sport is to survive in its current form, with the existing arrangements no longer fit for purpose given the way the gambling industry has changed. Bookmakers, meanwhile, claim they already contribute hugely through sponsorship, TV and the levy, and should in fact pay less.
Elephant in room gets outed
Yesterday's sports gambling conference organised by World Sports Law Report was a remarkably friendly affair given the enmity that exists between sports and bookmakers. All were able to agree on the "motherhood and apple pie" issues of improved education for players and working together to stamp out corruption. The elephant in the room remained funding, with speaker after speaker declining to elaborate on who should pay for it. It was left to the British Horseracing Authority anti-corruption chief Paul Scotney to inject a much-needed dose of realism into proceedings when he pointed out the gap he perceives between what sports governing bodies can do and the resources the police are willing and able to devote to match fixing in an era when they are facing cuts to their front-line budgets. "The appetite for dealing with this is pretty minimal," he said of the police's attitude, calling for a beefed up integrity unit across sport rather than the current "sports intelligence unit" housed in the Gambling Commission.
Ricky Hatton answers quiz call
According to organisers, Ricky Hatton will make his first public appearance since being pictured snorting cocaine on the front page of the News of the World at a charity event to raise money for Amir Khan's Gloves Community Centre and the Variety Club in Bolton on Saturday, according to organisers. The black tie Question of Sport-style event will see Hatton appearing as one of four team captains alongside Khan, El-Hadji Diouf and Darren Campbell. A spokesman for Khan insisted Hatton, seeking help for drug and alcohol addiction and suffering from depression according to his representatives, would still be appearing despite his recent well-publicised travails. "Amir wants to show his support for Ricky at what is clearly a difficult time," he said.

With Respect to athletes,Sportsmen etc why has it got to come down to legislation ......its common sense and its unbelievable that they actually do it.

Gambling is not a way to earn a living its entertainment and sportsmen are using it to make extra money and really no matter how you look at it thats corruption and needs stopping.

if i was a sportsman i wouldn't think about it and in my own mind think its totally wrong.

What's wrong in betting on yourself to win?

Sonny wrote:What's wrong in betting on yourself to win?

Betting on yourself to win by a specific score is wrong. Actually the more I think about it... yes it shouldn't be allowed

Sonny wrote:Betting on yourself to win by a specific score is wrong. Actually the more I think about it... yes it shouldn't be allowed

think before you type