Tuesday 24th of November~Sunday 6th of December at the Barbican Center in York.

But the task is beating Neil Robertson, WN3, triple crown winner and 6-0 conqueror of WN1 Mark Selby in the semi finals. He's also on a ten match winning streak to boot.

Can Liang get a surprise win in this all non-UK final or will Robertson win a second UK title?

I'll be rooting for Liang. It's very unlikely for him to win, but not impossible. Self confidence and handling his nerves will be key. But he will be more relaxed now because a place in The Masters is now safe so he can enjoy and find his A game I hope.. If not, Robbo deserves the title.

Robbo has played great all week

I think he will finish the job tomorrow

Yeah I too only hope Liang can give Robbo a good game, which I believe he can.

Who here thought Kyren Wilson could manage to beat Judd in Shanghai Final? Though to be fair Robbo is less likely to bottle this match than Judd.

I shouldn't really want Liang to make this competitive after the disgraceful handshake he did today, but a Final is a Final after all, and if it ends one sided

Noticed that this particular 2015 year has been full of surprise finalists at the ranking events, it seems it always features a top player v a surprise one.

I believe this is a trend that will continue in the future.

Neil Robertson vs Liang Wenbo for the Championship of the UK.

Interesting that it's 'only' 4-3 Robertson in head-to-heads...but, digging deeper - more significantly it's 2-0 Robbo in ranking tournaments.
I'll predict a 10-5 win for the Australian.

The new prediction is very reasonable in comparison.

Eurosport for me, please see thread regarding Dennis Taylor lack of respect for my comments.

Bit of both probably.

I like most think it,s a foregone conclusion,but on the other hand it would,nt surprise me if Liang were to win,


Robbo has been a machine,has played some brilliant snooker and has been unbeatable since the COC,but it still does,nt mean to say that he,ll play brilliant yet again today and that he,ll win.

Even Davis,Hendry lost matches when they were in they,re absolute prime,one can,t play brilliant every single match,there have always been shock results and there always will be.


Liangs done incredibly well to get this far,good on him for that,it would actually quite funny if he were to beat Robbo today,but i,m gonna go along with the opinion of the majority and say,.... that Robbo will win this.


Winning this is only gonna make Robbo even more dangerous in the future,now that his silverware is growing,it,s gonna make him even more determined,hungry to add to his collection.


When Ding won those 5 rankers,i really thought that he was gonna dominate,that it was him that was gonna be the boss,be the man to beat,but we all saw what has happened,i then thought Trump would dominate,but i was wrong again

,but we all know whats happened to him as well,although he could start to add to his silverware on a regular basis in the coming years.


I,m a bit cautious in sayin this,but,......i know think that Robbo will be the man to beat,

over the next good few years,he might not dominate,but i think he,ll win more than the other players,that he,ll be adding a good few trophys to collection. 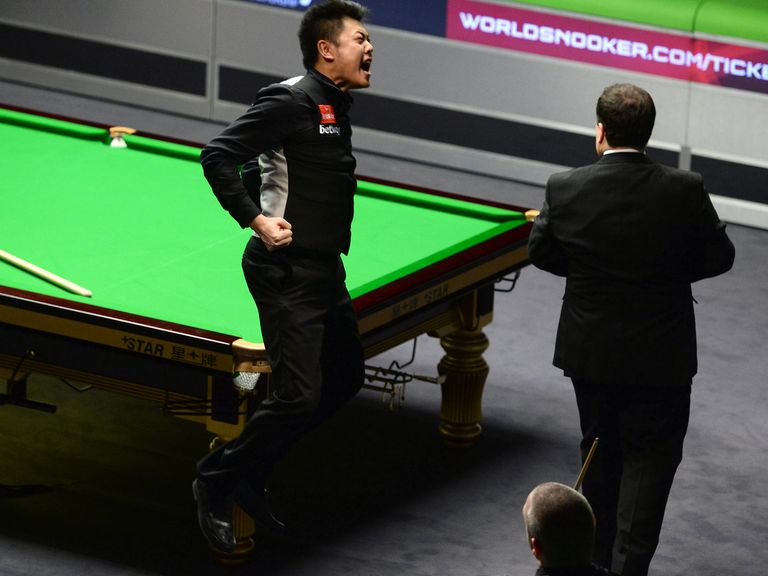 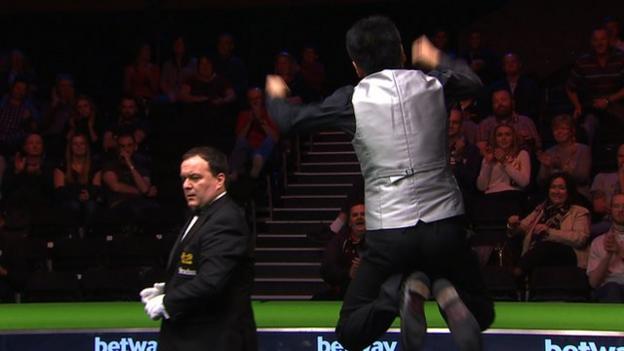 That picture would be perfect if he was actually jumping on Robbo's head. Maybe later today...

I am getting Roast Pork cooked for lunch. Watching the final. Back to work tomorrow.

Once more to the breach, dear friends.

I still got 5 cans of Fosters and some salty popcorn at home.

Might take it easy on the lager beer though. Ain't done anything but get snake hissed this week.

Good idea. I think I'll do the same. It's been a disappointing series. I quite liked the one with Davros and the Daleks. But after that one it seemed to go downhill.

I've thought it's been okay.

The found footage one was marmite.

What an blue frog.

I have finished the Pork lunch. It was most splendid.

I am taste testing some of my dad's home brewed lager later. It's brewed to a Mexican style.

Bit of both probably.

Yeah me too, I usually tune in for BBC at MSI to see what feaures they have.

Good idea. I think I'll do the same. It's been a disappointing series. I quite liked the one with Davros and the Daleks. But after that one it seemed to go downhill.

There's a bunch of women sassing The Doctor right now.

Just trying to get the last few minutes of Dr. Whom in before match time.

Why must The Doctor always lose the people he loves? :(