Interesting routine to improve your break-building. With the balls on the zone from blue to black, you'll practice some of the most common shots of the game while feeling the pressure to clear the table. Any player can try this routine, even if he can only pot three balls in a row. Repeating the same shots, for example the lower row of 4, will help you memorise these shots and make them easier. You can start from wherever you want.

If you can clear consistently, let's introduce the colours and try to clear the table. Avoid the cushions and be more precise with the cue ball so that you don't leave difficult shots.

Once you have mastered this routine and you've cleared the colours, you'll be doing breaks of around 80. BUT, what if we make it harder by widening the reds so as to block the pockets for the pink? This will limit your choices and force you to be more precise in terms of cue ball control.

This is me trying to get a dish on film, half an hour recording, wipe, start again. This was the one on my phone when I got home. I didn't manage to clear this time but it gives an idea of the pitfalls and tactics of the Christmas Tree.

The reds blocking pink to corner are the easy balls to pot and they do need clearing out of the way, but also can come in handy for later if you lose position playing for one of the more difficult reds.

The reds blocking pink to middle are difficult to land on, but if you do clear one early on it leaves a pink to middle for later to land nicely on the other reds in that area. You can see early on I always try to take the opportunity if I've got the angle on the black to send the white up to the pink area and try to land on one of the 2 reds to clear pink for middle for later on, knowing that if I don't get a shot there's always back up over the corner pocket. The pitfall of this tactic is landing straight on the red to middle knowing pink won't go to corner so the right angle for blue or back down for black is needed.

It's a really fun routine to do and I'm itching to get back to the club to have another go and try to get a dish on film and set a target (hence taking as many blacks as possible). It's great practice as well because it gets you in the mode for clearing the last few open reds and gets you into that train of thought if you're in a match and need to clear the last few open reds with colours to win the frame on the black.

I have cleared a few times with the camera off but with it on there is a bit of extra pressure as you get near the end knowing it's being captured, especially if you've pulled off a few good shots like I did in the last couple of attempts starting at 22 mins 30 sec. They both ended when I thought "This one would look good on film" at which point I knew I had to call it day.

You can see they fly off the cushions on the table I practice on, one of the pitfalls of playing on a club table and why I would recommend to decent players not to get too used to a table which has obvious flaws if you can help it because it will kill you when you come to play on a table that plays properly.

For now, until I go and rectify and get a clearance on film, this is the best effort, a 67:

I've still not filmed a dish up despite spending several hours on the routine since my previous post. The colours at the end are proving a mare for me on that table because of the springy cushions, and I've had kicks galore at vital times as well, no joke I've had one on every colour at the end bar the black!

I am now very proficient at clearing the 8 reds though, and I've also found that when playing an opponent in most frames I'm faced with a similar shot to one I've played / memorised within this routine. I had no idea just how helpful it would be to practice such routines.

The shot I play most frequently after the first red is this one, or the equivalent stun/screw shot into same position if low on the black: 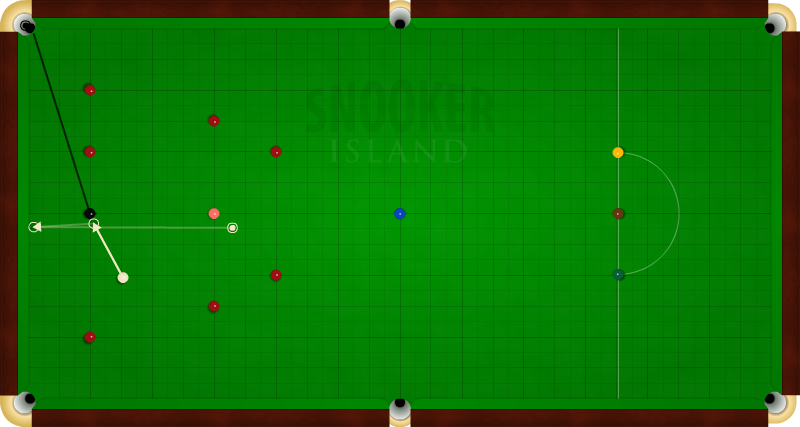 which ideally leaves the angle on red to middle to clear the way for pink, and back down to black: 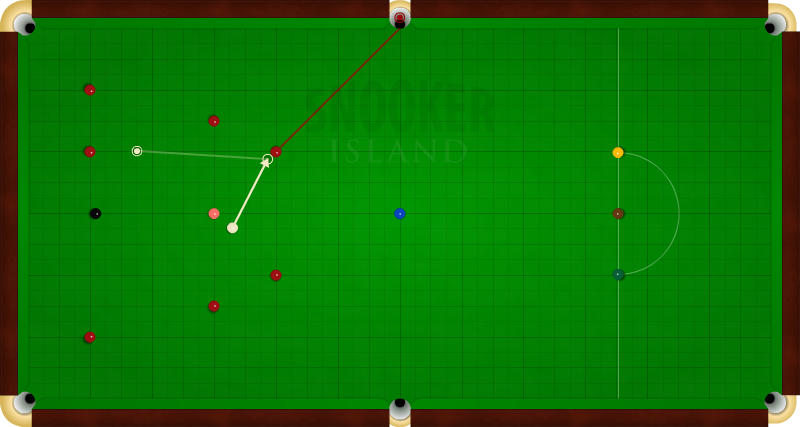 then you can take the bottom red to corner and land on pink to middle to attack the reds close to pink.

Another shot which I've used a lot is the top spin when just off straight on the black but with reds blocking the screw back with side: 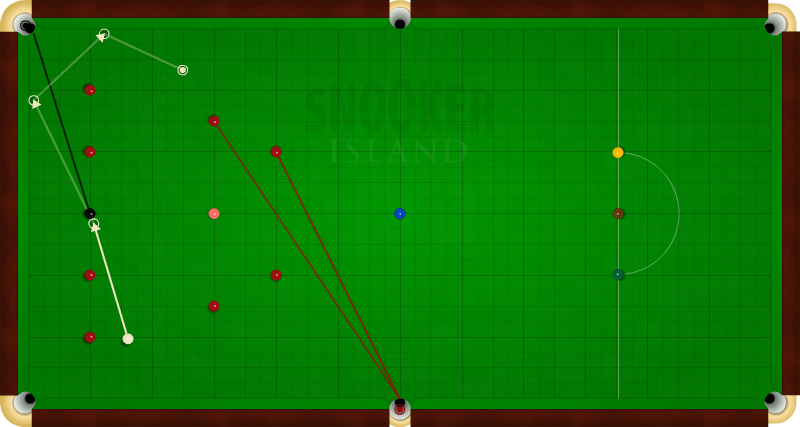 this allows you to attack the reds to opposite middle usually with position back to black guaranteed or at the very least a run through for blue as second prize, and is a shot I've consciously used in matchplay since practicing this routine.

Finally this my favourite shot in the routine when the chance comes. By landing on the red to corner the angle is usually half to quarter-ball so to pot pocket weight requires a bit of pace in the white, and by using the second red as a stopper it leaves position on the pink (assuming opposite corner is free, the only time this shot is on so concentrate), opens the path for pink to middle and leaves the cannoned red in a nice position to save for last and try to get nicely on a colour for yellow: 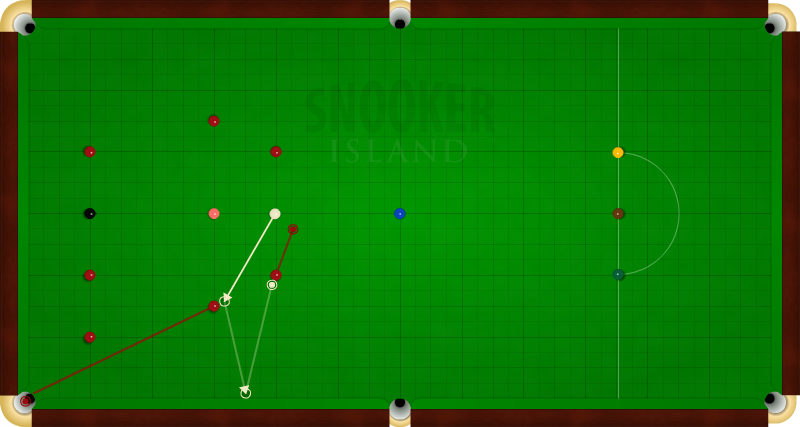 (Edit - a thought just occurred to me, I never think to go up for baulk colour off the last red. Obviously it will impact on the score if you're counting but for practice purposes it's bound to increase the chances of getting nicely on the yellow)

Interesting that even accomplished players found difficulty with this routine. I must try it! For it to be the max test, I guess it has to be done without disturbing any balls at all, reds wide and no cushion contact allowed, which would require incredible cue ball control and positioning no?