I saw that the other day, it was brilliant. It was interesting seeing the interviews with their parents, especially knowing what was to come.

thanks, gotta watch this sometime!

I like that old Eurosport logo in the corner.

I should get that up and watch it on my TV sometime.

This is tremendous!! Thanks for posting.

I am interested if anyone recognises any of the young competitors featured in the opening sequence.

I must go through my box of VHS tapes one day. I was thinking of doing it during lock down but never got around to it.

I'll have to watch this tonight.

Interesting the commentators considered Williams beating Quinton Hann in the semi final as a bit of an upset.

I know he was a decent player but was Hann regarded that highly as a junior?

I believe Hann got the only century in that junior competition.

I doubt he would have been reluctant to talk up his potential either.

Great nostalgia but especially nice to hear Mike Watterson in commentary. Mike, of course, the man who took the World Championship to the Crucible in 1977. Also founded the UK Championship and World Team Cup. He was also a very good player in his own right. There’s a story about three young overseas players sitting inside the Crucible the day before the tournament started, just soaking up the atmosphere. In walks Mike to test the match table. He picked up a spare cue and proceeded to clear the table with 137 without the cueball touching a cushion once... one of the players turned to the others and said “and he’s just the promoter!”

Good story Cyril, and nice to know Mike did ‘play’ at the Crucible, & in front of an audience. Given all he did for the game, I was always disappointed he didn’t qualify in his own right.

SteveJJ wrote:Interesting the commentators considered Williams beating Quinton Hann in the semi final as a bit of an upset.

I know he was a decent player but was Hann regarded that highly as a junior?

Not sure as a junior player but when he first turned pro many expected him to do big things and he could have done so much more had he bothered to practise and not pushed the self destruct button on his career. I recall reading at his peak he only bothered to practise four hours a week.

mick745 wrote:I am interested if anyone recognises any of the young competitors featured in the opening sequence.

I think this is David Gray. 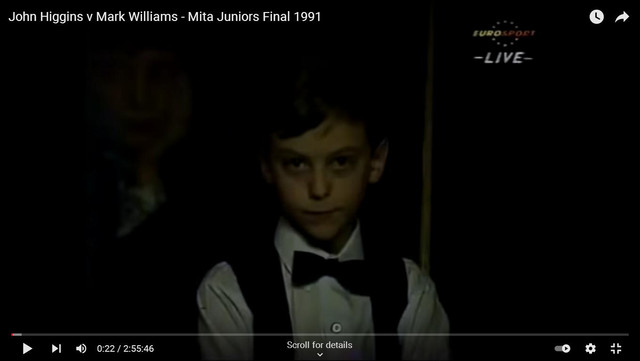 SnookerEd25 wrote:I believe Hann got the only century in that junior competition..

I've just been reading a bit about this tournament on Cuetracker. Ronnie got a 106 which was the highest break, Hann was the only other player to get a century.

O'Sullivan and Higgins met in the quarter finals, with John winning the final two frames to win the match 5-4. O'Sullivan hadn't dropped a frame in the tournament prior to meeting Higgins. Higgins came through three final frame deciders, showing that grit from an early age, including in the semis where he beat a chap called Jonathan Saunders (who I have no memory of).