SteveJJ wrote:To avoid collusion or the appearance of it, where a player already qualified via the OOM plays someone who can only qualify via winning the final match....would it be better to incentivise players to go for a win by saying the winners of the last match get a number of ranking points to start the season with whilst those qualifying via the OOM don't?

There are so many other ways to get on tour take James Cahill he reached the Crucible last 16 but he starts on Zero points so rewarding q school players with ranking points wouldnt be fair would it.

Nope, it would help on one issue but extend an unfairness elsewhere. But then theres probably no completely fair answer

I've already expressed my opinion how to make Q School fairer, and achieve the secondary aims of helping player development and reduce travel / hotel expenses for the players.

It just needs an incremental ranking system, not a points-based accumulation system. You could then have tournaments with a mix of top players (by ranking), qualification tournaments (like the Barnsley format), and invitation wild-cards (e.g. German players at the Tempodrom).

Nobody's ranking would be unfairly damaged: it goes up if you win, down if you lose.

There are many implementations of this in other sports. But once again, snooker sticks to the format that dates back to the 1970's.
Last edited by lhpirnie on 04 Jun 2019, edited 1 time in total.

Here is the antithesis of watching Barry Pinches playing snooker.

SteveJJ wrote:I think thats a fairly good spread. There were always going to be a few older journeymen qualify but at least there are quite a few youngsters and quite a few journeymen that didn't


I am not ageist: I think David Lilley will be a great addition to the tour, and can realistically hope to improve, beat some top players, have a deep run in a tournament, maybe qualify for the Crucible.

But some of those who have qualified seem a bit nostalgic to me. The fact that they can use their (vast) experience to get through a largely amateur field does not mean they are the best placed to make an impact on the pro tour. Neither is their presence part of a long-term development plan.

The younger players will find it very hard, in most cases impossible, to win matches. But at least they have the prospect of improvement. They just need to hang around for 4 or 6 years, and then they will be fine. Actually these young players are probably too young, in that I'm sure that some of them didn't expect it this year.

At least there are a few youngsters this time, which is quite a surprise to me. So at least a bit of encouragement. I tend to follow young players to watch their development, and change my allegiances every season.

But this is not unusual, is it? Two years ago 12 players qualified from Q School, and only two of them survived on the tour. The best young players were coming mainly through the amateur championships (e.g. ACBS, IBSF, WSF), but those tournaments have either collapsed, or don't award tour cards anymore.

So there remains a question about this rigid 128-player system (not that it ever is 128).

Draws for Riga and International Championship have been released.

Assuming the eight players who won their tour cards today enter, there are 13 Top-Up spots for Riga, and two for the International Championship

SteveJJ wrote:
Bit harsh on Hicks...two world semi finals. Fell off the tour due to Hendrys decision to not resign his place after retiring.

Hendry tried to resign his place but as World Champion he was a member for life and World Snooker refused his decision.

So glad Swissenbacher scrapes it, he made a semi last year 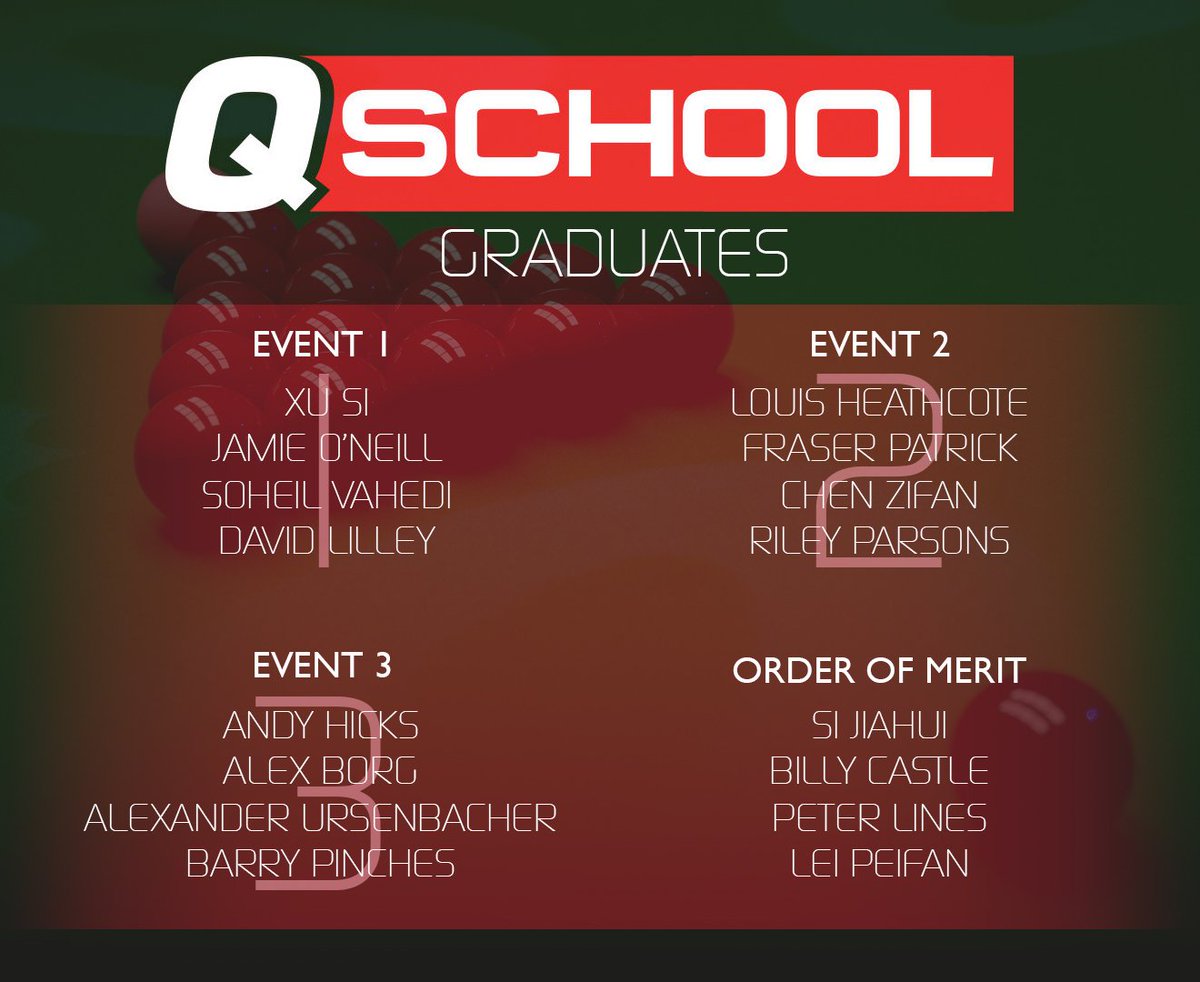 If I were Robin Hull I wouldn't pack in snooker until after the world cup.

Who is he claiming to have cheated? Ursenbacher?

Who is he claiming to have cheated? Ursenbacher?

They will stage a ranking event in Norwich this year to celebrate The Norwich Jockey's return to the tour. His qualifying match will be held back to the main venue.

Alex0paul wrote:Where can I find the order of merit table?

As with 90% of life's problems the answer is snooker.org.

Couldn’t find anything on erectile dysfunction

I believe that is the single funniest thing I have ever seen written on this forum.