Today starts the WSF U18 in Malta. The winner will be offered a 2-year Professional Tour Card starting in June 2020-21. The event consists of 11 groups with 5 players each, followed by knockout matches to determine the winner. The 55 teenagers originate from a total of 21 countries:
https://snookerscores.net/tournament-ma ... en/players

The final will be played on 9th January, after which the senior tournament will start, but many of the juniors have entered this as well. There are 8 tables, and live scores.

There are some well-known players, such as Iulian Boiko, Ryan Davies, Gao Yang, Julian Leclerc, Robbie McGuigan, Ben Mertens, Wu Yize and others who have been talked about as future pros...

Matches have started. They are playing group games, best of 5 frames. There is automated commentary, e.g. 'Boiko potted the black' from the 8 tables, but I haven't found any live streams yet.

The matches are scheduled 1pm, 3pm, 5pm today (British time). Tomorrow there are more sessions, but I guess there are some ceremonials today.

The match between Ryan Davies and Iulian Boiko was won 3-2 on the final black, after both missed several great chances.

So far there have only been 23 matches, and not all of the players have played yet, so it's a bit too early to make predictions or evaluate the standard. There will be another 83 group matches before the knockout rounds...

Day 2 has finished in the Group stages. It's not completely clear what the qualifying criteria are, but there are several players who have 3/3: Ryan Davies, Wu Yize, Dean Young, Robbie McGuigan, Jamie Wilson, Aaron Hill and a further 8 players with 2/2.

Group matches continue on Monday and Tuesday, but will be completed around midday on Tuesday.

Unfortunately from what I've seen of the standard, I can't see any of these players having the slightest chance on the Pro Tour in June. However, only 1 match per session is streamed, so I haven't seen much.

Edinburgh based Dean Young recently won a challenge tour event in Belgium. So his confidence should be high coming in to this.

Others who are very likely to finish 2nd include: Iulian Boiko and Gao Yang.

But added to the 22 1st/2nd placed players, I believe some 3rd placed players will advance, which will be good news for Lewis Ullah and Liam Davies who have 3/4, but behind on frame-difference.

There are a few more group matches still to play tomorrow, and then the knockout matches start.

I'm still struggling to see who, if anyone, will be a credible pro next season. Some of the boys are ridiculously young, with one match baving been won by a 9-year old! I really think it would have been better to have an U21 competition rather than U18 to award this tour card.

The draw for the knockout stages has been made, and the matches have started...

Rather surprisingly, they chose to allow 33 players through, out of the original 55, meaning that the top-3 in the 11 groups all qualified. I don't know when that decision was made, but it means that many of the matches played yesterday and this morning were basically irrelevant. I think it would have made for a more competitive tournament if they have qualified 24, which is similar to what happens in the rival events. That would have meant top-2, plus the two players who ended up 3rd in a 3-way tie in their group. The time saved would have allowed them to play best-of-7, rather than best-of-5, which is closer to what they will encounter in the Pro-game. This tournament feels like a nice junior meet-up, and not a serious qualifier for a player who will become a professional in June.

Slightly surprising losses for Robbie McGuigan, Kayden Brierley and Isa Ishtiaq, but with best-of-5's it's a bit unpredictable. Whoever loses the first frame is already under pressure.

The most high-scoring match was Wu against Leclercq. Wu got breaks of 106, 85 and 100, and Leclercq an 83. Generally the scoring hasn't been high in this comp, but Leclercq had two centuries earlier.

The Q-finals contains Sean Maddocks, Aaron Hill and Ryan Davies, who are well-known on the British scene. The two Chinese players are younger, extremely talented, but unpredictable.

The matches will be played at 10am (local time) tomorrow, with the semi-finals later tomorrow.

The Q-finals have been completed. Gao Yang and Aaron Hill won easily, Sean Maddocks and Wu Yize needed a bit more (they won 4-2). I'm pleased to see they finally got to play a best-of-7.

Tomorrow will be the final, and Tour Card presentation! All matches live streams on Table 1.

Yes, any one of the 4 players could win. Aaron Hill has also been suggested as a future Pro. The two Chinese boys are very young, but Wu Yize has more experience, with several wildcard appearences in Pro tournaments in China. Gao Yang is still only 15, and is a lot like Zhao Xintong: amazingly talented and stylish left-hander but very prone to lapses...

Aaron Hill is currently in the playoff positions on the challenge tour rankings. Maddocks not done as well this season.

The final will be:
Sean Maddocks - Gao Yang

Maddocks won his semi-final 4-0. The accident-prone WSF weren't able to broadcast a live stream of the second semi-final, as the match for some reason was played on table 2. This was unfortunate since it involved the two most talented players in the competition, and was very close. Gao won 4-3, with breaks of 76, 52 and 60. Wu has led 3-2, with a top break of 61.

Maddocks is probably a strong favourite: he is older and has a stable temperament. He has won his matches relatively easily, and played his semi-final on the main table, an advantage. Gao Yang will only turn 16 in September, so if he wins he would be the youngest professional player for 7 years.

The final will be tomorrow at 12pm (local time). I don't know whether there will be a live stream.

There is a live stream. Currently 2-2 in best-of-9. They have a mid-session interval. 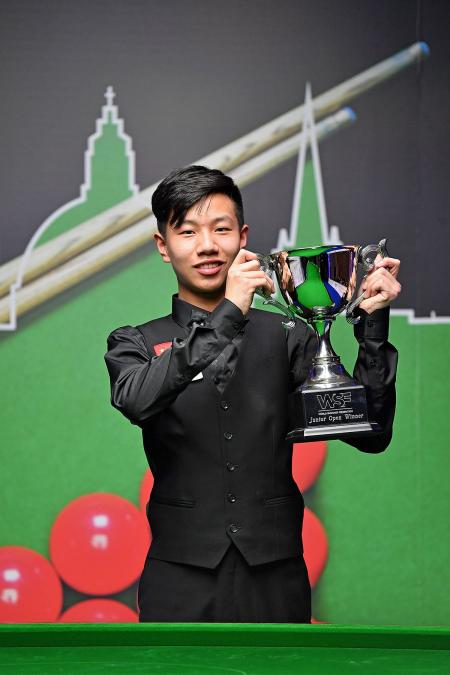