Hamilton angry at the cameraman!

Hamilton angry at the cameraman! 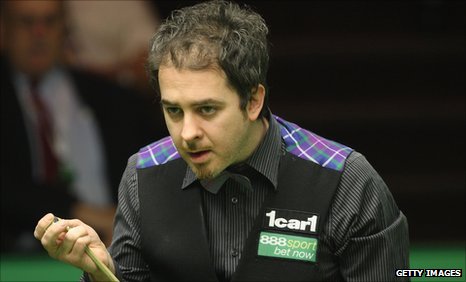 Anthony Hamilton criticised a cameraman after his quarter-final exit to Mark King at the Shanghai Masters.

Hamilton lost 5-2 to King after surprise wins over Stephen Maguire and Ronnie O'Sullivan.

But he did not go quietly, and criticised a man behind one of the television cameras after going out.

"The cameraman was moving on every shot. It was hard to concentrate and it did my head in. I'm still angry about it now," said Hamilton.

"Whenever I was down on the shot he was in line with me and his arms were moving around. He had an attitude problem.

"I complained three times about it but it didn't make any difference. Then they changed one of the cameramen but it was the wrong one.

"Once your concentration is gone it's difficult to get it back. I know it was the same for both players but I let it get to me."

King faces another all-English clash on Saturday when he takes on Mark Selby, who came from 4-2 behind to beat Shaun Murphy 5-4, completing his fightback with a break of 117 in the deciding frame.

"Shaun played better than me for three quarters of the match and he probably should have won," said Selby.

The other semi-final promises to be a thriller between Neil Robertson and Welshman Mark Williams, whose presence along with King means three of the four remaining contenders are left-handers.